Pages In This Blog!

WE NOW SELL FOLKMANIS PUPPETS!!!
WE OFFER HAND PUPPETS, FINGER PUPPETS, STAGE and CHARACTER PUPPETS.
CONTACT US FOR ALL YOUR CLASSROOM PUPPET NEEDS.

MUSICAL MANIPULATIVES - BOOK 1 and 2!
ALL THOSE GREAT MANIPULATIVE IDEAS HAVE BEEN PUBLISHED IN 2 NEW HANDBOOKS. INDEXES INCLUDE TITLE, STEADY BEAT, MELODY, SEASONAL and CHILDREN'S LITERATURE REFERENCES.

CLICK TO EMAIL FOR MORE INFO OR TO ORDER YOUR MATERIALS: creativemusicclassrooms@gmail.com. 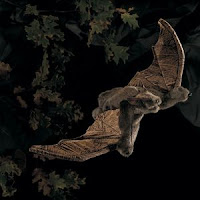 1.  Brown Bat - $25.99
This realistically detailed Brown Bat puppet features a workable mouth, complete with fangs, and leather-like fabric wings, which spread into an infamous silhouette, then flap silently into the darkness.  Befriend this creature of the night and he just might rid you of the scourge of stinging insects. 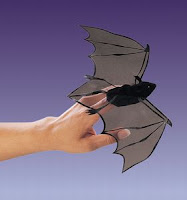 2. Mini Bat - $5.49
This little bat puppet spreads skin-thin wings, ready to take to the shy on the tip of your finger.  With silk-screened detailing and beady black eyes, this aerial "rodent" will make a fine specimen to add to your finger puppet collection. 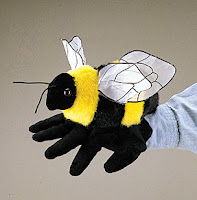 Make friends with the flowers wherever you go with this plump & plush Bee glove puppet. Anatomically accurate six-fingered design can be worn by both adults & children, on either hand. Hangtag includes a favorite Aesop's fable.

Can be used with the following songs and literature titles:
Bee Bee Bumble Bee
10 Busy Bees 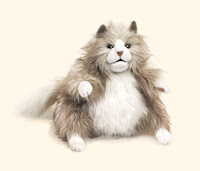 4.  Fluffy Cat - $27.99
A princess among kitties, this whimsical Fluffy Cat has a movable mouth with a realistic tongue to demand more kibbles. Her extra fluffy body and long luxurious tail are sure to elicit lots of laughs.

Can be used with the following songs and literature titles:
The Old Grey Cat is Sleeping
Don Gato
Naughty Kitty Cat

This firefly mini-finger puppet really lights up!  Use the puppet while telling stories or singing familiar summer folk songs.

Can be used with the following songs and literature titles:
Fireflies!
It's a Firefly Night
The Very Lonely Firefly

Before she dons the "formalwear" look of the adult penguin, this Baby Emperor Penguin puppet sports the gray feather-like plush coat of youth. Animate her head and flippers to create awkward baby penguin-like movement.

Can be used with the following songs and literature titles:
Skater's Waltz
Tacky the Penguin
Five Penguins Skating on the Ice

Folkmanis' COTTONTAIL RABBIT is 15 inches and super soft. It sits alert with ears perked; front paws and mouth are movable on this life-like rabbit. 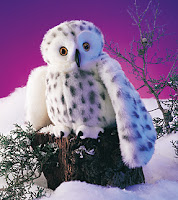 This puppet is a real head-turner! Besides being able to make his head turn 360 degrees, you can animate this Snowy Owl's feather-soft wings to create a real flap in your neck of the woods!

WE ALSO CARRY A COMPLETE LINE OF FOLKMANIS LITTLE PUPPETS - $12.99 each.

Looking for something specific? Type here to search through my activities.

CHILDREN'S LITERATURE: Books to Sing - Search the blog archive by date for an activity.

Thom Borden
A former Chicago music teacher, Thom Borden completed his Orff Master Level under Jos Wuytack and has studied music and movement in Europe. Continued studies included Kodály Training at Colorado State University and Silver Lake College with Sr. Lorna Zemke. As a former clinician and Music Consultant for Macmillan/McGraw-Hill and past-member of the National Association of Storytellers, Thom’s sessions incorporate a performance perspective. Affiliations have included MENC, AOSA, OAKE, the Association Orff France and the Alliance Française Chicago. Thom was a clinician at the 2004, 2007, 2008 and 2010 AOSA Conferences, 2008 and 2010 Early Childhood Music and Movement Conference, 2008, 2009 and 2011 OAKE Conferences, and the 2008 Australian Orff Conference in Melbourne. Thom is the past-president of the Chicago Orff Chapter and presents annually at many state educators’ meetings. He published selected Orff arrangements in the Macmillan/McGraw-Hill series, Spotlight on Music and is currently working as an independent music clincian and consultant.

Thanks for Visiting My Blog! Come back each week for new ideas.